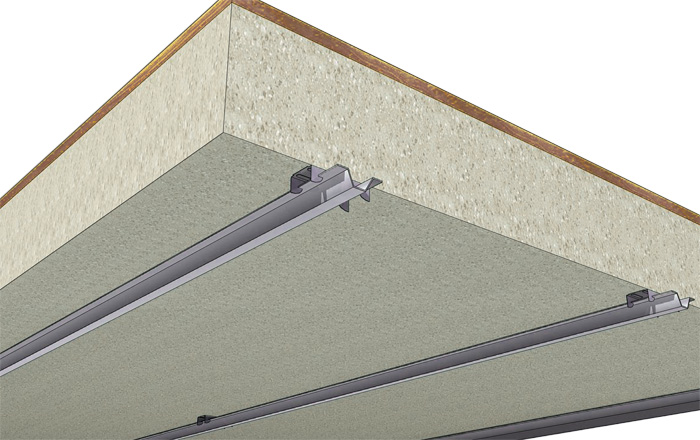 The basic definition of decoupling is to separate objects. Decoupling to isolate sound is most commonly done with Hush Sound Isolation Clips, resilient channel, or specialty framing like double stud or staggered stud walls. Sound vibrations will transfer best from material to material rather than through open space. An example of this would be sound transfer from drywall to framing and then to the drywall on the other side. You can stop this transfer with decoupling by reducing the number of connections isolation sound clips or by breaking the path entirely by specialty framing…

Sound isolation clips are small metal and rubber pieces that attach to the framing with screws. Metal furring hat channel inserts into the clips with drywall screwed into the channel. Clips provide decoupling by suspending the drywall on the furring hat channel about 1-1/2″ from the framing. Not all clips are equal, only the well engineered clips with a soft rubber base can achieve results meeting or exceeding double stud walls. Other than the design of the clip, the two reasons isolation clips perform so well are 1- the minimal number of connections between the framing and drywall, 2- the flex allowed in the channel within the wide 48” span between each clip.

The increase in performance by using Hush Sound Isolation Clips is significantly better than the performance of a staggered stud wall and equal to the performance of double stud walls with three inch spacing. Isolation sound clips also provide an affordable alternative for achieving a high rating in a decoupled ceiling without setting up independently framed joists, i.e. room within a room design.

Decoupling Walls and Ceilings Through Framing

The room within a room concept, fully decoupling the framing from the existing structure, is a powerful way to isolate sound with minimal use of isolation products. Double stud framing with three inch spacing between walls will have the same performance as a Hush Sound Isolation Clip system. Extending the spacing to six inches will provide superior performance over any resilient clip system with most gains in the lowest frequencies. A true room within a room design will have independent stud walls and independent ceiling joists. The performance of staggered stud walls is not as significant as assumed by most. A standard framed wall with  Green Glue Compound will rate about as well as a staggered stud wall. 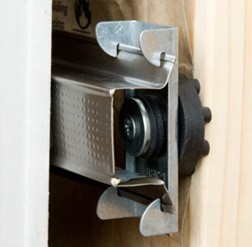 The issue of flanking (sound transferring indirectly through framing) is a problem with double and staggered stud walls. The top and bottom plate of the wall still tie directly into the framing above and beneath the wall. Resolve flanking through the top plate by decoupling it from the ceiling joists using the Hush Sound Isolation Clips.  Using Green Glue Compound in a double or staggered stud wall has considerable value because of the flanking issues common with this framing method.

Value of Insulation In Decoupled Assemblies

2 thoughts on “What is Decoupling?”