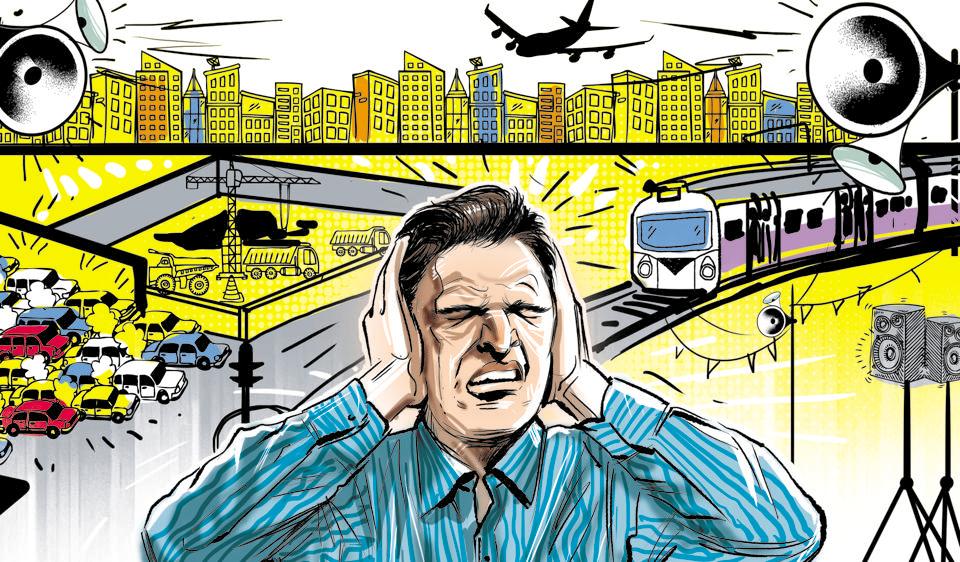 Noise’s in the home, work or school often disrupts people’s concentration. According to the National Institute for Occupational Safety and Health, noise also affects people’s health by increasing general stress levels and aggravating stress-related conditions such as high blood pressure, coronary disease, peptic ulcers and migraine headaches. Continued exposure does not lead to habituation; in fact, the effects worsen

Several studies have indicated that stress resulting from ongoing noise can induce the release of cortisol, a hormone that helps to restore homeostasis in the body after a bad experience. Excess cortisol impairs function in the pre-frontal cortex—an emotional learning center that helps to regulate “executive” functions such as planning, reasoning and impulse control. Some recent evidence indicates that the pre-frontal cortex also stores short-term memories. Changes to this region, therefore, may disrupt a person’s capacity to think clearly and to retain information.

Though not definitive, recent research also suggests that noise-induced stress may decrease dopamine availability in the pre-frontal cortex, where the hormone controls the flow of information from other parts of the body. Stress resulting from noise, then, may decrease higher brain function, impairing learning and memory.

Noise has been associated with important cardiovascular health problems. In 1999, the World Health Organization concluded that the available evidence suggested a weak correlation between long-term noise exposure above 67-70 dB(A) and hypertension. More recent studies have suggested that noise levels of 50 dB(A) at night may also increase the risk of myocardial infarction by chronically elevating cortisol production.

Fairly typical roadway noise levels are sufficient to constrict arterial blood flow and lead to elevated blood pressure; in this case, it appears that a certain fraction of the population is more susceptible to vasoconstriction. This may result because annoyance from the sound causes elevated adrenaline levels trigger a narrowing of the blood vessels (vasoconstriction), or independently through medical stress reactions. Other effects of high noise levels are increased frequency of headaches, fatigue, stomach ulcers & vertigo.

Research commissioned by Rockwool, a insulation manufacturer, reveals one third (33%) of victims of domestic disturbances claim loud parties have left them unable to sleep or made them stressed in the last two years. Around one in eleven (9%) of those affected by domestic disturbances claims it has left them continually disturbed and stressed. More than 1.8 million people claim noisy neighbors have made their life a misery and they cannot enjoy their own homes. The impact of noise on health is potentially a significant problem across Canada given that more than 13.5 million Canadians (38%) have been disturbed by the inhabitants of neighboring properties in the last two years. For almost one in ten (7%) Canadians this is a regular occurrence.

The extent of the problem of noise pollution for public health is reinforced by figures collated by Rockwool from local authority responses to a Freedom of Information Act request. This research reveals in the period April 2008 – 2009 Canadian councils received 275,838 complaints about noise pollution from private residences. This resulted in environmental health officers across Canada serving 7,089 noise abatement notices, or citations under the terms of the local Canadian by-laws. According to data from the city’s 3-1-1 service, in 2015, Vancouver saw 2,148 noise complaints, nearly half of them in just three neighborhoods.

Because some stressful effects depend on qualities of the sound other than its absolute decibel value, the annoyance associated with sound may need to be considered in regard to health effects. For example, noise from airports or sudden impulse noises are typically perceived as more bothersome than noise from traffic of equal volume. Annoyance effects of noise are minimally affected by demographics, but fear of the noise source and sensitivity to noise both strongly affect the ‘annoyance’ of a noise. Even sound levels as low as 40 dB(A) (about as loud as a refrigerator or library) can generate noise complaints and the lower threshold for noise producing sleep disturbance is 45 dB(A) or lower.

Other factors that affect the ‘annoyance level’ of sound include beliefs about noise prevention and the importance of the noise source, and annoyance at the cause (i.e. non-noise related factors) of the noise. For instance, in an office setting, audible telephone conversations and discussions between co-workers were considered to be irritating, depending upon the contents of the conversations. Many of the interpretations of the level of annoyance and the relationship between noise levels and resulting health symptoms could be influenced by the quality of interpersonal relationships at the workplace, as well as the stress level generated by the work itself. Evidence for impact on annoyance of long-term noise versus recent changes is equivocal.

Estimates of sound annoyance typically rely on weighing filters, which consider some sound frequencies to be more important than others based on their presumed audibility to humans. The older dB(A) weighting filter described above is used widely in Canada, but underestimates the impact of frequencies around 6000 Hz and at very low frequencies. The newer ITU-R 468 noise weighting filter is used more widely in Europe. The propagation of sound varies between environments; for example, low frequencies typically carry over longer distances. Therefore, different filters, such as dB(B) & dB(C), may be recommended for specific situations.

Furthermore, studies have shown that neighborhood noise (consisting of noise from neighboring apartments, as well as noise within one’s own apartment or home) can cause significant irritation and noise stress within people, due to the great deal of time people spend in their residences. This can result in an increased risk of depression and psychological disorders, migraines, and even emotional stress.

In the workplace, noise pollution is generally a problem once the noise level is greater than 55 dB(A). Selected studies show that approximately 35% to 40% of office workers find noise levels from 55 to 60 dB(A) extremely irritating. The noise standard in Canada for mentally stressful tasks is set at 55 dB(A), however, if the noise source is continuous, the threshold level for tolerability among office workers is lower than 55 dB(A).

One important effect of noise is to make a person’s speech less easy to hear. The human brain compensates for background noise during speech production in a process called the Lombard effect in which speech becomes louder with more distinct syllables. However, this cannot fully remove the problems of communication intelligibility made in noise.

Infra-sound, sometimes referred to as low-frequency sound, is sound that is lower in frequency than 20 Hz (hertz) or cycles per second, the “normal” limit of human hearing. Hearing becomes gradually less sensitive as frequency decreases, so for humans to perceive infra-sound, the sound pressure must be sufficiently high. 20 Hz is considered the normal low-frequency limit of human hearing. When pure sine waves are reproduced under ideal conditions and at very high volume, a human listener will be able to identify tones as low as 12 Hz. One study has suggested that infra-sound may cause feelings of awe or fear in humans. It also was suggested that since it is not consciously perceived, it may make people feel vaguely that odd or supernatural events are taking place.

The U.S. Environmental Protection Agency authored a pamphlet in 1978 that suggested a correlation between low-birth-weight (using the World Health Organization definition of less than 88 oz) and high sound levels, and also high rates of birth defects in places where expectant mothers are exposed to elevated sound levels, such as typical airport environments. Specific birth abnormalities included harelip, cleft palate, and defects in the spine.

According to Lester W. Sontag of The Fels Research Institute (as presented in the same EPA study): “There is ample evidence that environment has a role in shaping the physique, behavior, and function of animals, including man, from conception and not merely from birth. The fetus is capable of perceiving sounds and responding to them by motor activity and cardiac rate change.” The effects of noise exposure are highest when it occurs between 15 and 60 days after conception, a period in which major internal organs and the central nervous system are formed.

Later developmental effects occur as vasoconstriction in the mother reduces blood flow and therefore oxygen & nutrition to the fetus. Low birth weights and noise were also associated with lower levels of certain hormones in the mother. These hormones are thought to affect fetal growth and to be good indicators of protein production. The difference between the hormone levels of pregnant mothers in noisy versus quiet areas increased as birth approached.

In a 2000 publication, a review of studies on birth-weight and noise exposure note that while some older studies suggest that when women are exposed to less than 65 dB aircraft noise a small decrease in birth-weight occurs, in a more recent study of 200 Taiwanese women including noise dosimetry measurements of individual noise exposure, the authors found no significant association between noise exposure and birth weight after adjusting for relevant con-founders, e.g. social class, maternal weight gain during pregnancy, etc.

Some info courtesy of Wikipedia

3 thoughts on “How does noise affect your health?”